I have held off visiting these as I knew we were going to visit as a group. I have been a fan of Eliasson’s work ever since his first installation “The Weather Project” 2003, at the Tate in 2003.

At that time, I had never seen anything on such a scale and the effect was mesmerising. The sun appeared to have arrived into the Turbine Hall.

Today we experience a new version in a foggy corridor where the light changes as we walk through an ever-changing corridor of light. I am reminded of “The Weather Project” when the light turns a brilliant glowing orange red colour.

The piece is somewhat let down by the fact that a number of the participants leave the door at the end of the corridor open in order to take selfies and some of the fog is let out. 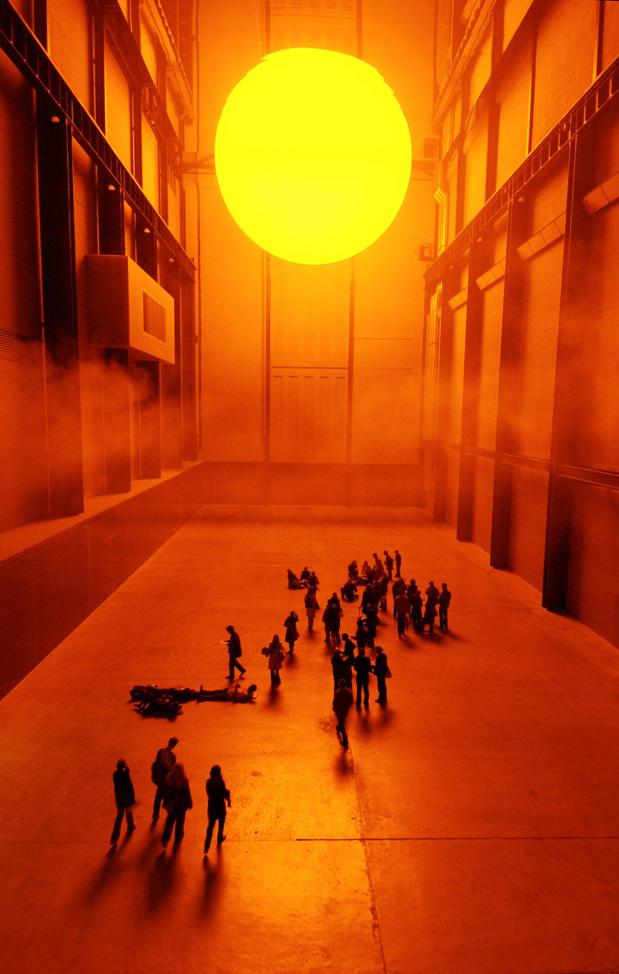 Eliasson’s work on Glacier melt has been newsworthy recently, as in December 2018 he brought blocks of glacier ice to London to melt.

He has also photographed the same glacier over a ten year period to highlight climate change, and these photos in the exhibition document the change. However, they are much more subdued than the ice blocks which he brought to London and highlighted the change much more dramatically.

Another favourite was the rain room, although this was principally because there was a lovely toddler running around in the rain getting very wet. 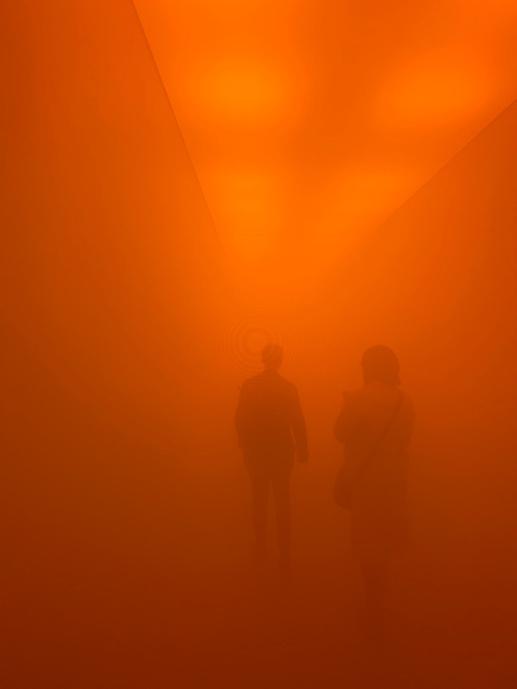 The Nam June Paik exhibition was a reminder that time and technology are at the forefront of memory. Paik’s work was a study in the history of 20th century technology. His pioneering work became reality when MTV started in the 80’s, and it was fun to think that he made this art before we knew the technological possibilities. I am sure he would be amazed to see what we take for granted now. His television robots, “Robot-K456”, 1964, are humorous and yet prophetic as we live our lives dominated by TV, although this has shifted again, and our lives are dominated by screens and YouTube streams. I’m sure he would have something to say about this. His “TV Buddha” 1974 is a study on meditation and it’s never ending struggle to escape the physical world, stuck in a meditation of itself. I had never heard of the Fluxus Movement until today. It makes sense to me now that I have read more on it. And his collaboration with other artists, John Cage, Charlotte Moorman and Joseph Beuys was another revelation. I particularly liked the immersive video shown here for the first time since the 1993 Venice Biennale. A collage of new footage and samples from old works it forms a fitting end to the exhibition as a means of summarising his artistic career.

As always, the cabinet of curiosities and sketch books remains my favourite part of the exhibition. I always enjoy the small things that make an identity..